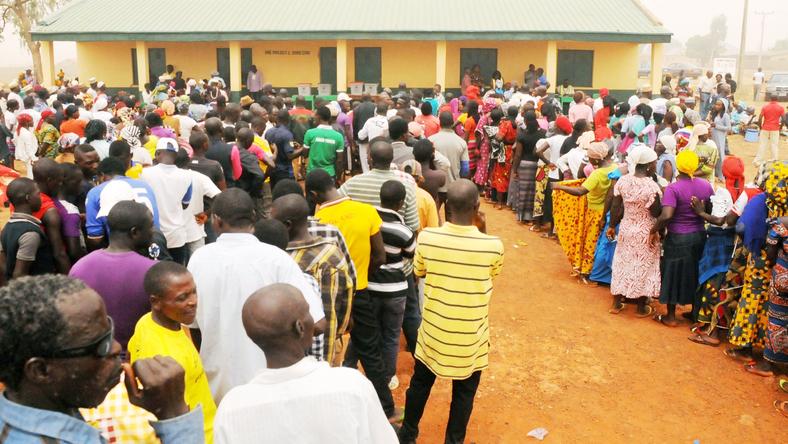 As governorship election re-runs take place in some parts of the country today, some Nigerians share their opinions about INEC’s performance so far.

I think INEC did well, although there were a few lapses which they were not directly responsible for. I remember during the presidential and National Assembly elections, we had the issue of voting starting late in Bayelsa, and INEC ascribed it to the security challenges which obstructed them from moving materials on time, but during the governorship and state assembly election, we did not experience that. Voting started early as expected, card reader issue was properly handled and it worked efficiently.

INEC has done its best but the problem lies with the politicians; they are the greatest problem for INEC, security agencies and indeed Nigerians. Until politicians learn to behave in a proper manner or do things right, we will continue to have problems in our electoral process. For God’s sake, what is the role of the military in our electioneering process?

However, one message I have for INEC is that the ad hoc staff they gather two weeks to election is not acceptable; they contribute seriously to the problems INEC is facing. A lot of them don’t even know how to operate the card reader, thereby creating problems for people. So, INEC should do well to train them properly.

All I can say is that INEC really tried, though with some lapses. The 2019 election was a hot contest. So many parties were registered and there were so many candidates to contend with.

The conduct of the election was good save for the initial postponement of the Presidential and National Assembly elections by a week which really angered Nigerians. However, the postponement was justified as there were real hitches with logistics and other challenges.

The issue of inconclusive elections is very annoying. Although the declaration of the elections inconclusive in about six states was inevitable, the court injunctions and other delays regarding Tafawa Balewa LGA results has placed INEC in the spotlight and given it a bad name. I hope we will have something better next time.

INEC did extremely well in the election in Bayelsa State. It was a very transparent exercise. Apart from the few places where card readers had issues, the election was generally hitch-free. Although we have inconclusive elections in some states, when compared with previous elections in Nigeria, you will agree with me that in those places that INEC declared inconclusive, results would have been declared in favour of the party in government.

The issue of ballot box snatching was minimal, if not zero, so INEC performed above 80 per cent in the 2019 general elections, but there’s still need for improvement because Nigerians are yearning for 100 per cent perfection in our electioneering process.

I am not inclined to score INEC favourably. In the first place, they were reclusive to the extent of threatening national security. Secondly, in terms of materials handling, they were careless.

When you look at the allegations of massive inducement and corruption, it’s not easy to give them a pass mark. Moreover, you have the issue of inconclusive elections in so many places, which has to do with constitutional interpretation. It shouldn’t be like that if they had lived up to their responsibility.

The 2015 election was more transparent than this year’s election because in the just concluded election, INEC performed below average. The 2019 election was not free and fair, peoples’ mandate were stolen nationwide, there was intimidation by the military and all sort of things, so it was not a good experience.

Bilyaminu Hassan Jambil, 32, Technology Entrepreneur, Bauchi
INEC performed well in the Presidential and National Assembly elections, but performed below expectations in the subsequent elections. We had so much hope in INEC but we are a bit disappointed by what is happening after the governorship and state Houses of Assembly elections.

The issue of inconclusive elections has eroded the confidence we had in INEC from the beginning. The electoral body should have done better than this. If they had done well, they would have given us the cause to trust it more. What happened in Bauchi, Adamawa, Kano, Plateau and other places was very unfortunate. There were many cases of compromise which have not been tackled. We now have an unnecessary stalemate in Bauchi and people are really disappointed.

I worked as an INEC ad hoc Presiding Officer during the elections and I know some of the challenges faced by INEC. The commission really tried to conduct free, fair, credible election but faced so much criticism and sabotage, especially from the political class.

What really caused the setback despite all the efforts was the intense power play by politicians who always want things to be done their way. I may partly blame INEC for some of the problems encountered, but most are not its making but acts of compromise and sabotage.

My general assessment of INEC’s performance in the election is good. People were given the chance to vote despite the low turnout, but they have made their choices. They have to be patient with the legal tussles that will follow the elections; they are all part of the process. But there is need for INEC to improve in subsequent elections.

DROP YOUR OWN OPINION