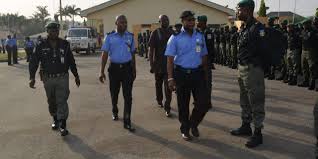 A farmer, Tosin Ojuola, who claimed that his five-day-old baby was stolen at gunpoint in his home in Ijagbe, Mopa-Muro Local Government Area, Kogi, is being held by the police as a suspect in the matter.

The News Agency of Nigeria learnt that the incident occurred around 8pm on Thursday, April 11, when the gunmen invaded the home of the Ojuolas and forced the wife at gunpoint to surrender the child to them.

At the Nigeria Police Force headquarters in Lokoja on Sunday, Tosin said he left home barely 10 minutes when the gunmen invaded his apartment, beat up his wife and took away the child.

“I left home and was on my way to church for vigil on that night when I suddenly heard my wife’s voice crying and shouting for help.

“I quickly ran back to my apartment and my wife told me that two armed men had forcibly taken our baby away and run into the nearby bush.

“I shouted for help and some youths immediately joined me to go after the gunmen to rescue my baby; but all our efforts yielded no result as we were not able to get them.

“We searched all the nearby bushes to some kilometres away, but because it was late, we could not go very deep into the bush,” he said.

READ  157 Children From Nigeria, Others Among 220 Rescued Human Trafficking Victims

The baby’s father said he reported the abduction immediately at the Divisional Police Station in Mopa, where the police promised to investigate the matter.

Tosin added that the following morning, more villagers were mobilised to search for the baby far into the bush, including farms and Fulani settlements, but that all efforts were abortive.

He explained that the police came to his house the following day to arrest his landlord and a Fulani man, who was a tenant in the house.

Tosin said the matter took a twist on April 14 when the police invited him for questioning and later detained him.

“The police told me that the community leaders demanded my arrest, claiming that the village oracle (Ifa) revealed that I had a hand in the stealing of my own baby.

“Meanwhile, before my arrest, three of the community leaders came to my house on the third day and said that they were going to make sacrifice to their gods to expose the perpetrators and recover my baby.

“They asked me to provide axe, cutlass, hoe, palm kernel oil and fresh yam, which I did, and they asked me to take them to the spot where I buried the placenta of my baby.

“I took them there and they did some incantations and poured the oil on the spot and assured me that my baby would be found.

“To my greatest surprise and shock, it was the same people that asked the police to arrest and detain me for allegedly stealing my own baby,” he said.

Tosin stated that the case was later transferred to the Criminal Investigation Department at Police Headquarters, Lokoja, on Wednesday.

“I have been in police cell for seven days without food and without any hope of finding my stolen baby. My image has been tarnished.

“Why will I do such evil against my own baby?

“The stolen baby was my sixth child. I am still owing N4,000 at the clinic where I took the baby to after he was delivered at home.

“I have spent over 11 years in the community, my aged parents are in the same community; I have never been involved in any crime in my life.

“I am innocent; I am a devoted and committed Christian. How will I steal my own baby?” he asked.

Shade Ojuola, his wife, in tears, expressed sadness over the incident.

She told NAN by telephone that she had bathed the baby, laid him in bed and was receiving fresh air outside with the landlord’s wife when the gunmen emerged.

“They flashed their torchlight and commanded us to hands up.

“I started shouting when they brought out guns and ordered me to shut my mouth; they forced the door open and carried my baby away.

“My husband had just left the house for church not up to 10 minutes when the kidnappers came,” she explained.

Shade called for the immediate release of her husband to enable the family to continue the search for their baby.

“We have been married for 11 years with five children and he loves me and all our children; I don’t want to lose him,” she said.

The aged father of Tosin, Mr John Ojuola, 74, told NAN by telephone that some people in the community were conniving with the police to implicate his son.

The traditional ruler of Ijagbe, Chief Amushin Adeleye, denied any involvement in the matter.

Adeleye said the two people the community suspected after findings and consultations were Ojuola’s landlord, Johnson, and a Fulani man, Isah.

He said the community later reported the duo to the police.

The state Commissioner of Police, Mr Hakeem Busari, said he was aware of the matter.

When told that the complainant in the case had been in detention at the CID section, Busari expressed shock and asked for time to enable him to find out the real situation from the officer-in-charge of the CID.

However, more than two hours after, the police commissioner did not call back to tell NAN his findings.

Several attempts to re-establish link with him failed because he had switched off his mobile phone.