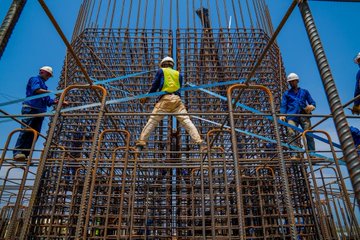 Vice President Yemi Osinbajo on Friday inspected the onging construction work on the second Niger Bridge in Onitsha and affirmed government’s commitment to early completion of the work.

Osinbajo who started the inspection from Asaba axis with Governor Ifanyi Okowa of Delta state, said that the Niger Bridge was very important for the economy of the South-East and the Nigerian economy as a whole.

The Vice President who was also accompanied by Power, Works and Housing minister Babatunde Raji Fashola said: “I had the privilege of visiting the bridge from the Asaba end.”

“The fascinating thing as we were told by the engineers is how much work goes into just the piling.’’

Osinbajo tweeted his experience during the inspection

Describing the quality of work, Osinbajo said that “each one of the piers is the equivalent of an 18 storey building in the ground and there are about 1,000 – 1,300 workers hard at work to bring the project to a reality.

It is the firm commitment of President @MBuhari that this project be completed as quickly as it can.

The Vice President also visited Eke-Awka market in Anambra where he briefed traders on the prospects of TraderMoni, a component of the four focal project of Social Investment Programme of the government.

The programme, he tweeted, provides credit to small business owners.

“Trader Moni is a distinct loan product that seeks to boost the informal sector by enumerating and empowering traders with loans. We are in Eke-Awka market, Anambra State to monitor the progress.’’